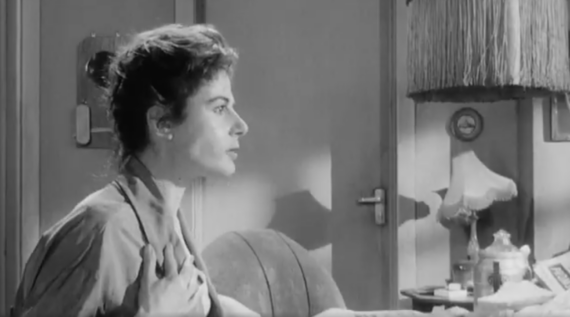 DRESSING GOWN is a 10 minute video consisting entirely of an appropriation of the black and white film Woman In A Dressing Gown that was made in 1957. The original film is considered an example of British social realism, and a prototypical version of Kitchen sink realism. Modern criticism has noted that it was a more progressive film in the field of gender politics than most in the British New Wave.

Watching this film through a contemporary ‘CRIP-MAD theory’ lens, it seems obvious that the main character, the wife, as played by Yvonne Mitchell, is undiagnosed as neuroatypical. We feel empathy for her, and her continuous and stressful struggle to be a ‘good housewife’ and take care of her husband and son.

Whereas the original film is about an extramarital affair, and compares the domestic scenes of the two women, one chaotic and the other organised, DRESSING GOWN focuses only on the wife Yvonne. With humour and pathos the short film aims to share the emotional experience of undiagnosed adult ADHD.

The key outtake however should not be a joke: Not only is ADHD and ADD a real condition in adults, but one that can be a truly debilitating disability.

This entry was posted in About us and tagged ADD, ADHD, Chronic illnness, Dressing gown, Neuroatypical, Woman in a dressing gown