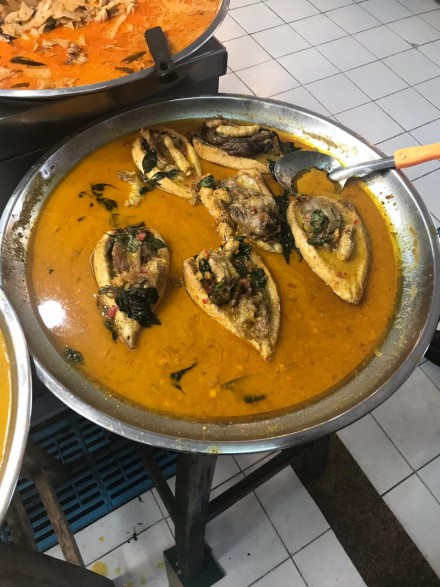 The Professor, The Chef and an Epic Dream.

A lot has been happening since I met culinary experts Professor Pushpesh Pant and Chef Nishant Choubey at the Tasting India Symposium in Delhi last December 2017. At that time, Chef Nishant was curating food experiences at the elegant aero-city Roseate House.

Soon after, Chef teamed up with the Professor to go full-speed on a mission redefine what Indian cuisine means to the world! A mission inspired by Tasting India’s Indian Food Manifesto. Globally, Indian cuisine suffers from pretty much the same fate as Chinese cuisine. The extraordinary subtlety and diversity of Indian cuisine is often lost in globally standardized dishes. Chicken Tikka Masala might make good business and comforting takeaway food for a Brit like me, but too often this kind of fare just ends up confining the image of Indian cuisine to an inexpensive, greasy afterthought.

The term curry was adopted by the British East India Company, from the Tamil word Kari, meaning sauce. The menus at most Indian restaurants in the UK are usually an extremely simplified version of Mughlai/ Moghul cuisine, which is just one type of north Indian food. That cuisine is again reduced to two or three rich sauces and types of stews. These flavours do not begin to represent Moghul cuisine, let alone the rich heritage of the Indian continent. Dr. Pant calls this phenomenon ‘The curse of curry!” This is not to dismiss all the food of the Indian diaspora, but the world has so much more to experience when it comes to ‘Indian cuisine.’ 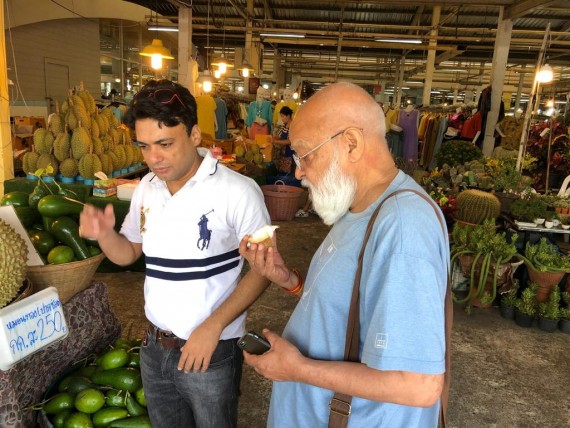 The Holy Grail: nurturing a nations food heritage.
“There is an urgent need to document the dishes of the Indian continent before they disappear forever,” says the Professor.

Already so much has been forgotten. Even the diversity of ingredients is slowly disappearing as people move away from an agricultural way of life and food is increasingly mass-produced for supermarkets. India’s socio-economic landscape is also taking its toll. In the past, cooks were often servants, and recipes were handed down orally, with subtle variations from household to household, let alone region to region.

Food is the strongest expression of our humanity. In Europe, food is recognised as the guardian of a nation brand’s identity and a main driver of the economy. A huge emphasis has been being placed on protecting, sharing and communicating food heritage in France, Spain, and Italy, for example, so that the plethora of industries connected to food can thrive, both for export and also as attraction.

Food museums are also starting to appear, to try and help to preserve global and local food heritage in archives. Restaurants and chefs, inspired by the likes of El Bulli and Noma, are researching locality to explore the meaning of food for future generations. Food heritage has become synonymous with quality as well as quality of life. The European Union has schemes to protect and distinguish traditional regional specialties, such as the protected designation of origin (PDO), Protected Geographical Indication (PGI), and Traditional Specialties Guaranteed (TSG) certifications.

To consider what is happening to centuries of knowledge and rich culture of war-torn countries such as Iraq and Syria is heart-breaking. The loss is hard to fathom. Food heritage runs so much deeper than the recipes you find in restaurants. It’s in people’s homes and hearts. Food provides the earliest knowledge of locality, interconnectivity and sustainability, that enabled our ancestors to thrive and trade internationally. It includes site-specific knowledge about wildlife, plants and animals and the methods of food production and resources that enabled farming villages to appear. These farming communities were by nature ‘integrated ecovillages’: communities that grew diverse crops and grains, tended to cattle and orchards, made their own crafts and textiles, and supplied local networks of breweries, artisans, markets, hotels and inns.

Food heritage is a dynamic spectrum that gently evolves and changes form over changing geographies and landscapes. But it is a story that is continuous and connects us all and refuses to be contained within national boundaries. 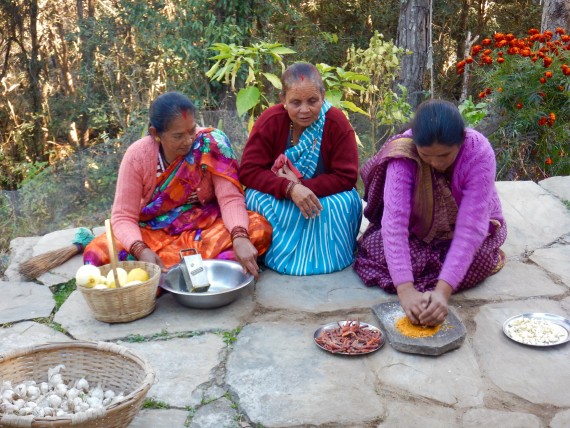 Currently, the Chef and the Professor are curating food experiences for an upcoming festival in Delhi hosted by the Asian Heritage Foundation in association with World Bank. One of the meals curates a selection of dishes that were loved by the great Mahatma Gandhi, to commemorate his 150th Birthday. 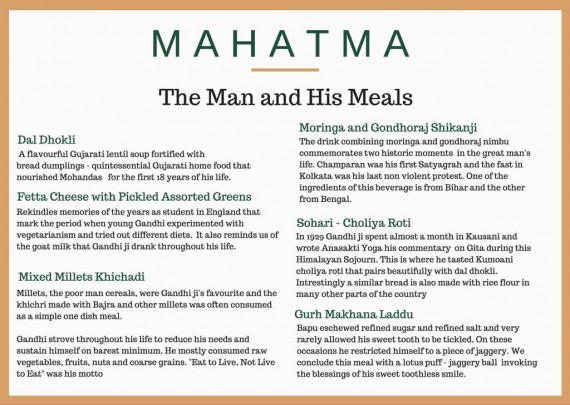 The meals that the great Mahatma Gandhi loved.

Pop-up stories.
“It really is time the world learns that there is so much more to Indian food than Mugalia cuisine!” says the Professor! “India is a vast continent with ingredients and dishes and techniques as diverse as the people, cultures and languages from which they originate!”

One of the first pop-up events the Professor and Chef did this year was at the famous Indus restaurant in Bangkok. Indus has been in service since 2006 and making waves with fashionable international crowd since winning its place in the Michelin guide. Indus is one of the few restaurants to introduce quality Indian cusine to the west via fine dining. Inviting the Professor and Chef to curate a menu outside the known Moghul dishes was a statement in itself. A provocation, perhaps, and a gateway invitation to Michelin to go and experience India? 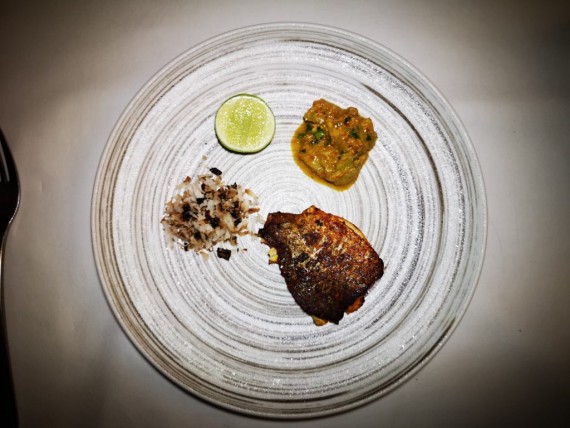 At Indus: Kadala Byas Minu, or Kombdicha motla, representing Mangalore. The fish is marinated with kokum, a plant in the mangosteen family.

Chef Nishant explains: “The concept of our popup menus and events is to make the world aware of the diversity of India’s culinary heritage, whilst encouraging chefs to learn about all these forgotten stories and adapt and innovate with them.”

Chef and Professor curated a meal for Indus which they called: Past, Present and Future; 10 courses inspired by 10 regions. Each course told a special story about the history of the region it represented, and a special ingredient that is at risk of being forgotten. In contrast to the impeccable meal at Mrs. Radha Bhatia’s Roseate Farm last December this meal was not pure vegetarian – but contained seafood, meat and poultry.

Nomads on a mission.
The Chef and Professor continue to travel India researching traditional recipes and ‘lost gems’. They travel to a region, follow locally known food trails looking for local superfoods, they forage in forests and meet food producers and talk to local people about food celebrated in folklore. Most recently, they have focussed on the hill state of Uttarakhand, Himachal Pradesh, as well as Jharkhand, Chhattisgarh and Orissa. 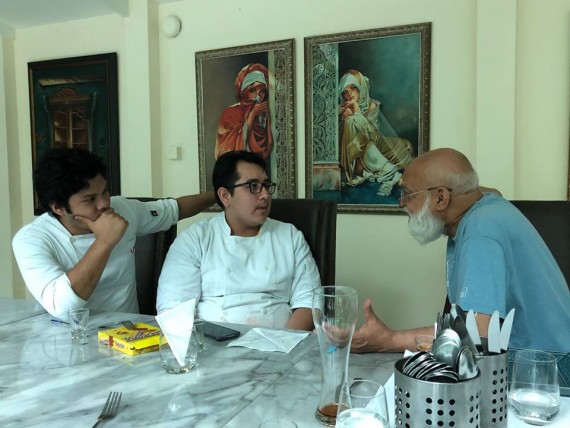 “We work together like conjoined Siamese Twins!” says the Professor. They have two more members in their core team; Zuber Baigh helps them with archival documentation and media, and Govind Singh Kirola is in charge of the ethno-botanical and cultural anthropological research. The Professor and Chef travel together following the leads of the researchers who support their fieldwork with ongoing research.

“Our dream project is to set up a culinary institute specializing in Indian vegetarian cuisines,” says Chef Nishant.

The Professor concludes. “And for India we wish three things; That there should plenty for everyone to eat, with freedom of choice to eat what one wishes to eat. This is a matter of  distribution. We have plenty.

Secondly, food should be healthy and free from all artificial flavors, colorings, preservatives, and synthetic additives of any kind.

And lastly, the food on our plates should be produced with dignity for everyone involved, relating organically to the people and places who produce it.” 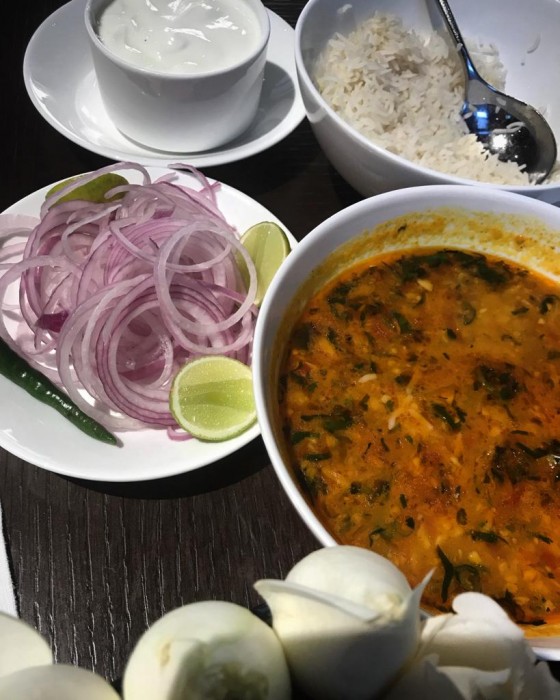 How I first met Chef at the Roseate Hotel, Aerocity: I have never had such a delicious Tarka Daal, and to this day I do not understand what Chef did to elevate such a simple and well-known vegetarian dish! We soon got talking, about food of course.